One might say, “our body produces our own marihuana…”

The endocannabinoid system is a system expressed in several parts of the human body, with a very high presence within the Central Nervous System (CNS).

It consists of cannabinoid receptors (the most characterized being CB1 and CB2, among others) that recognize cannabinoids produced by our own body (known as endocannabinoids,) as well as several proteins that regulate the synthesis and removal of cannabinoids from the body.

Nowadays it is well known that cannabinoids can be produced endogenously or be obtained from the cannabis plant. Cannabinoids can also be produced synthetically in the laboratory (Figure 1). Regardless of their origin, all cannabinoids activate their corresponding receptor in the cell membrane and trigger a biological response in our bodies. 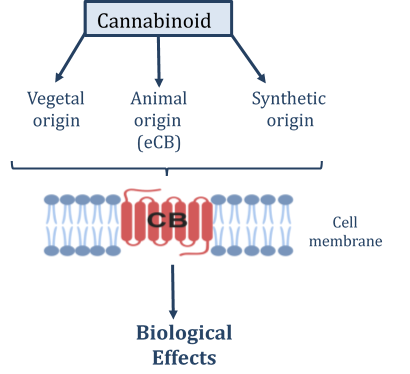 Figure 1: Origin of cannabinoids and their cellular receptors (CB). Adapted from Guzman and Galve-Roperh.

Endocannabinoids are derived primarily from arachidonic acid and they elicit a response once attached to their receptors. Their precursor is naturally found in the cell membrane and, occasionally, a group of proteins breaks the precursor molecule releasing endocannabinoids to the outside of the cell.

Anandamide (AEA) and 2-arachidonoilglicerol (2-AG) are the two most studied endocannabinoids. Their structure and chemical composition is very similar to that of THC, the main psychotropic component of plant-derived cannabinoids.

The best-studied cannabinoid receptors, CB1 and CB2, belong to the most common group of membrane receptors within the human body, which consists of those receptors coupled to protein G. This protein will be responsible for regulating the effects of cannabinoids within the cell.

The activity of endocannabinoids (and that of plant-derived and synthetic cannabinoids as well) will be constrained to those areas of the body that actively express the corresponding receptors. Among those areas the CNS is particularly relevant. Its main role consists on regulating homeostasis, that is, the state of steady internal physical and chemical conditions.

The CB1 receptor is known to be abundant in areas of the CNS that modulate movement (basal ganglia, cerebellum), memory and learning skills (cerebral cortex, hippocampus), feelings (amygdala, limbic system) and sensorial perception (thalamus), those with psychotropic and antiepileptic properties and autonomous and endocrine functions (hypothalamus, spinal cord) as well as in the peripheral organs, although to a lesser extend.

The CB2 receptor is mainly expressed in the immune system, both in cells and tissues, so it is believed to play a more important role in the effects of cannabinoids on the modulation of the inflammatory and immune responses in general.

In the CNS, the CB1 receptor is expressed in neurons (mainly in the terminal region of axons, in the synapse) although it is also expressed in astrocytes (glial cells responsible for maintaining homeostasis and feeding neurons with nutrients, as well as regulating synapse) but also in vascular endothelial cells, where their activation induces vasodilation. The CB2 receptor is expressed in microglial cells, which are the resident cells of the immune system in the brain and are involved in the inflammatory response.

Endocannabinoids may be acting as messengers between neurons. While they are not considered as true neurotransmitters, since neurotransmitters, by definition, are contained within vesicles inside the cell and are then released upon certain stimuli, endocannabinoids are involved in the regulation of synapses associated with several processes, even regulating the concentration of well-known neurotransmitters such as glutamate, GABA or serotonin, acetylcholine, dopamine, histamine, norepinephrine, prostaglandins and opioid peptides. Both the positive and negative interactions over the activity of these neurotransmitters are responsible for most of the pharmacological effects of cannabinoids, regardless of their origin (endogenous or exogenous).

The therapeutic potential of cannabinoids spans over a wide range of pathologies and there is scientific evidence both in animals and humans that shows how the analgesic effect of cannabinoids could be useful for the treatment of pain. They could also be useful in the treatment of inflammatory processes within then CNS and related to several pathologies, such as neurodegenerative diseases. In this regard, the neuroprotective effect of cannabinoids has also been proved, preventing neuronal death either due to acute damage or, potentially, in a neurodegenerative disease.

Due to their essential role in the establishment and consolidation of memory and learning, modulating the endocannabinoid systems opens up a range of opportunities for the treatment of diseases such as post-traumatic stress, food and metabolic disorders or even the treatment of obsessive-compulsive phenomena.

For instance, the presence of both receptor types in organs involved in the absorption of nutrients, intake and energetic balance, such as the liver, intestinal tract, pancreas, spleen, skeletal muscles and fat cells (adipocytes), might explain the therapeutic potential of cannabinoids on the regulation of food and energy balance.

1-Lu and Mackie (2016). An introduction to the endocannabinoid system