In general terms, an although deeper studies are still needed, scientific evidence shows that cannabinoids stimulate appetite and reduce behavioral disorders as well as the symptoms and progression of neurodegenerative diseases such as Alzheimer.

There are currently several studies that show a neuroprotective, anti-inflammatory and antioxidant effect of synthetic and plant-derived cannabinoids. The combination of these properties suggests the great potential of cannabinoids for the treatment of diseases such as Alzheimer. Several research groups initiated studies with in vitro cultures of neuronal cells as well as with animal models of Alzheimer’s disease in rodents, and they showed how the treatment with CBD was able to stop the cognitive impairment in rats that was caused by the rapid accumulation of the beta amyloid peptide, which is characteristic of the Alzheimer’s disease. During these studies it was shown that, in addition to the neuroprotective and anti-inflammatory effect, CBD was able to inhibit the modifications of Tau and beta amyloid proteins, which are typical of this disease. Furthermore, CBD treatment has a powerful antioxidative effect and induces neurogenesis in animal models of Alzheimer’s disease.

Several studies also concluded that cannabidiol or CBD, the non-psychotropic component of cannabis, could also reduce memory loss in mice.

The neuroprotective effect of cannabinoids has also been shown in other neurodegenerative diseases such as Parkinson’s disease, Huntington’s disease and multiple sclerosis, among others.

Nowadays, it is widely accepted that CBD is a neuroprotective agent, since there are multiple research studies that show the ability of cannabinoids to prevent cell death and suggest that cannabis could modulate the course of Alzheimer’s disease.

There are a few studies also showing that the administration of THC, the psychotropic component of cannabis, together with THC agonists (that is, synthetic molecules with the same function as THC) inhibits the enzyme that is responsible for the accumulation of amyloid plaques. Such effect was greater than that of other drugs used against Alzheimer’s disease, such as Donepezil and Tacrine.

Research studies in rats combining the administration of the two cannabinoids that are naturally obtained from the cannabis plant, CBD and THC, show a superior effect on memory when their performance is assessed in a behavioral test that evaluates memory and learning. Furthermore, a 40-50% reduction in neuroinflammation was also observed in those animals.

It can be thus concluded that cannabis could be used to treat Alzheimer’s disease due to it being neuroprotective and having and effect of neuroinflammation (it reduces it), in addition to the fact that it increases the expression of some neurotrophins (neuronal and axonal growth factors) that may facilitate the regeneration and/or building of novel neural circuits, which is the main issue in Alzheimer’s disease. 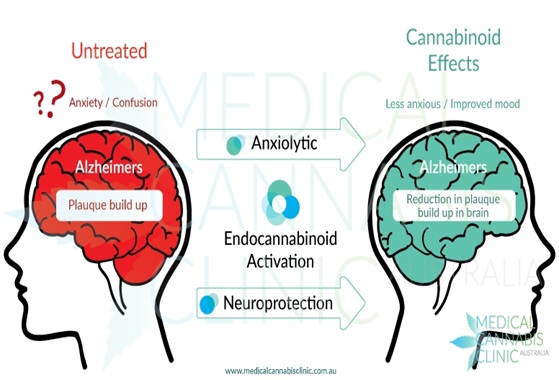 It has also been shown that the administration of medicinal cannabis oil drops can improve the quality of life in patients with Alzheimer’s disease, which constitutes another important aspect in the progression of their condition. Such improvements consisted of a reduction in delusions, agitation, irritability and apathy.

Researches concluded that the addition of medicinal cannabis oil to drugs already approved for the treatment of Alzheimer’s disease constitutes a safe and promising option that not only contributes to improve the progression of the disease but also the quality of life of patients and their relatives.

What is Alzheimer’s disease?

Alzheimer’s disease is a neurodegenerative disease that occurs due to the gradual degeneration of neurons in the temporal lobe, causing the progressive deterioration of neural circuits involved in memory and language. This deterioration is the main responsible for the characteristic symptoms of this disease, such as: memory loss, emotional imbalance, learning difficulties and loss of self-sufficiency. The worsening of these symptoms leads to dementia and eventually to the death of the patient.

During the course of the disease patients experience changes in their brain tissue due to the progressive and constant loss of a neurotransmitter that is vital for the proper functioning of the brain, that is, acetylcholine. This substance allows nerve cells to communicate with each other and it is involved in mental activities related to learning, memory and thought. 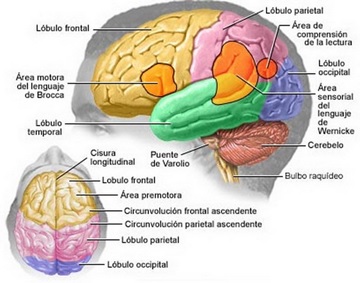 Temporal: Processes auditory information as well as learning and memory.

Parietal: Processes sensory information such as touch and spatial sense.

In addition, it has been shown that one of the first preclinical symptoms in patients with Alzheimer’s disease is the loss of smell, since some of the first cells affected by the disease are those of the entorhinal cortex (located within the temporal lobe, involved in olfactory memory, which allows us to remember different smells in order to relate them to food, objects as well as pleasant and unpleasant situations).

Overall, the neurologic symptoms of the disease are:

How is it diagnosed?

Alzheimer’s disease is usually diagnosed upon using positron-emission tomography (PET) and detecting differences in zones of high neuronal activity (red) between healthy patients that age normally and patients affected by Alzheimer’s disease, which present reduced activity in the temporal areas. 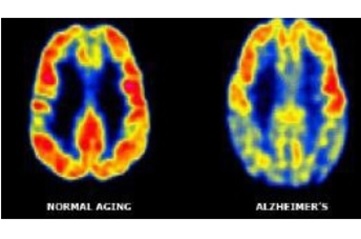 Source: Teaching resources from the Faculty of Neurobiology, University of Barcelona

These studies are complemented with data collected from the patient regarding loss of both memory and learning skills, inability to carry on with simple daily tasks and/or interrogating relatives and friends about changes in the personality and behavior of the patient. Blood and urine tests are also indicated to discard related diseases that cause dementia and, sometimes, the analysis of spinal cord fluid is also needed.

What is going on in the brain of a patient with Alzheimer’s disease?

In general terms, lesions within the central nervous system produce an activation of glial cells (microglia and astrocytes, neurons defense and support cells). Once activated, these cells produce an inflammation that can create pain and degeneration.

Usually, astrocytes try to isolate the affected area, producing what is known as a glial scar. The glial scar prevents the spread of the lesion but also the regeneration of neuronal connections, since it inhibits axonal growth.

The death and degeneration of neurons generates the accumulation of neurofilaments. This phenomenon is not exclusive of Alzheimer’s disease, it is also observed in other neurological diseases such as in amyotrophic lateral sclerosis (ALS), in some dementias, in the Charcot-Marie-Tooth disease, in diabetic neuropathy, axonal neuropathy, etc.

Neurons are highly specialized cells with a characteristic morphology: they are very elongated cells 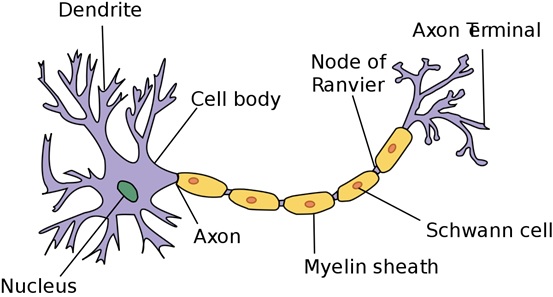 Neurons can be divided into the neuronal body or soma (which contains the nucleus with the genetic material that determines the synthesis of proteins), the axon and the axon terminal. The axonal transport of molecules generated by the soma is essential and requires a lot of energy, as it does the transmission of the nerve impulse along the axon. In several neurodegenerative pathologies there is a malfunction of the axonal transport.

In Alzheimer’s disease in particular, the APP (amyloid precursor protein) and A-beta (beta-amyloid) proteins, which regulate the synapses and neuronal plasticity (the ability to establish new connections in the adult brain leading to learning) are mutated. These abnormal proteins accumulate and form plaques and filaments which lead to neuronal degeneration. Another protein involved in Alzheimer’s disease is the Thau protein. Changes in the state of phosphorylation and activation of this protein can lead to neuronal cell death. This protein is essential in the stabilization of microtubules within the axon. 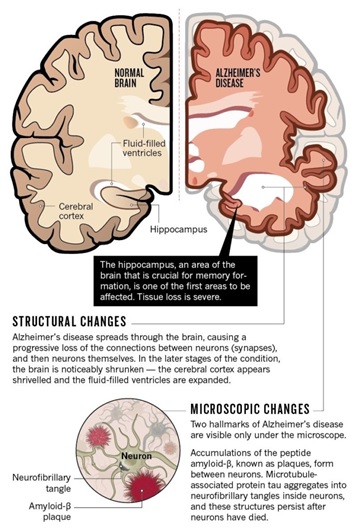 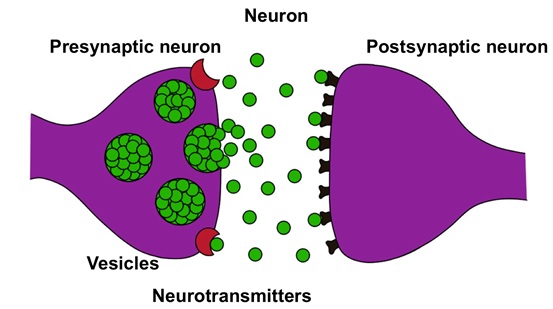