Strokes can also be hemorrhagic if the interruption is caused by the rupture of blood vessels in the brain leading to a hemorrhage, and thus are called hemorrhagic strokes.

The interruption of the blood supply prevents the normal functioning of those areas that are no longer irrigated, impairing neurological and physiological activities. The extent of the interruption will determine the severity of the damage caused, which in some cases can become irreversible.

The prevalence of strokes is higher in high-income countries and also increases with age. Among the elder population, the main risk factor for stroke is high blood pressure, or hypertension, but diabetes, heart diseases and smoking are also related risk factors. 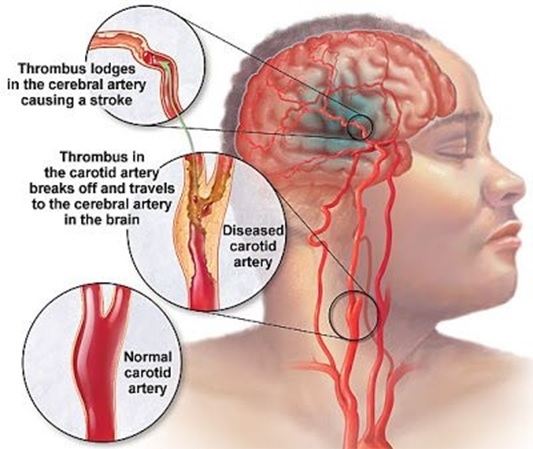 A study on Cannabis and Ictus published in the scientific journal Nature (https://www.nature.com/articles/npp201744?foxtrotcallback=true#bib8) describes some of the benefits associated with the use of marijuana. The study evaluated the global and regional resting cerebral blood flow (CBF), the oxygen extraction fraction (OEF) and the cerebral metabolic rate of oxygen (CMRO2).

Results of the study revealed that those participants that used marijuana regularly showed greater values of oxygen extraction fraction (OEF) and cerebral metabolic rate of oxygen (CMRO2) compared with nonusers. The regional blood flow was greater in the right pallidum/putamen among marijuana users when compared with the control group. The putamen, together with the pallidum, constitute the lenticular nucleus, an area involved in the motor control of the body, such as modulating the direction of voluntary movements. The study states that these findings prove the effects of cannabis use, such as the alteration of the global and regional central metabolism in patients with prolonged exposure to cannabis. Such neurophysiological alterations should be considered regarding both research as well as future clinical applications.

“….Cannabinoid receptor agonists inhibit glutamatergic synaptic transmission and reduce the production of tumor necrosis factor-α and reactive oxygen intermediates, which are factors in causing neuronal damage. The formation of the endocannabinoids anandamide and 2-arachidonoyl glycerol is strongly enhanced after brain injury, and there is evidence that these compounds reduce the secondary damage incurred. Some plant and synthetic cannabinoids, which do not bind to the cannabinoid receptors, have also been shown to be neuroprotective….”

The production of endocannabinoids increases after a cerebral injury, which helps reduce any collateral damage. The phytocannabinoids that are present in the cannabis bind to the endocannabinoid receptors and inhibit the release of neurotransmitters and glutamate, while also acting as antioxidants. In the event of a stroke, the accumulation of reactive oxygen species (ROS) increases since there is a strong glutamate signaling. Both THC and CBD have antioxidant properties that inhibit such glutamate signaling and, thus, promote a reduction in the concentration of ROS following a stroke. 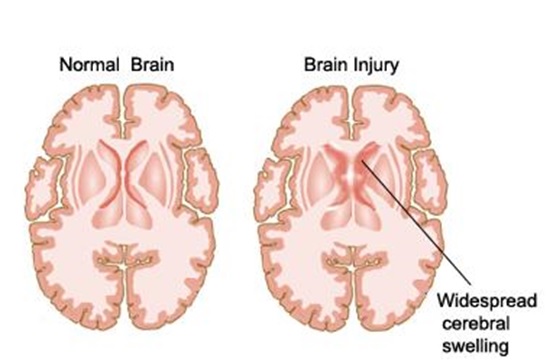 Brain injury produced by an acute event, such as CVA or TBI is caused, partly, by inflammation (Mahesh Kumar)

Glutamate in the nervous system

Glutamate is a non-essential amino acid, since our organism can synthesize it. It is involved in several metabolic pathways and it is part of our proteins. Its role in the central nervous system (CNS) is to facilitate and speed up communication between nerve cells, that is, to favor the synapse.

Inside of the brain there are neurons that use glutamate as a neurotransmitter in order to communicate with other cells after and electrical stimulus. These neurons express several receptors that specifically recognize glutamate and, thus, react to it. When the concentration of glutamate is high, such receptors are over-stimulated and are involved in several biological responses.

Ischemia, cerebral hypoxia in newborns and cerebrovascular accident (CVA) all cause an increase in the concentration of glutamate until toxic levels are reached within the interneuronal space, which is also known as excitotoxicity. Upon the over-stimulation of glutamate receptors, high concentration of calcium ions enters into the neurons and such influx of calcium hinders the normal activity of these cells and activate the mechanisms that lead to hyperexcitability, neurotoxicity, degeneration and neuronal death.

Drugs that block glutamate receptors are, hence, antagonists, and it has been shown that they have a protective effect against the mechanisms of neurodegeneration and they have successfully been used in the clinical treatment of cerebrovascular accident. Furthermore, other studies have evaluated the effects of CBD and THC in neuron cultures exposed to toxic glutamate levels.

THC, CBD and other cannabinoids have also been shown to be potent antioxidants in in vitro neuron cultures, and cannabidiol was also able to reduce the neurotoxicity caused by hydrogen peroxide.

“…As evidence that cannabinoids can act as an antioxidants in neuronal cultures, cannabidiol was demonstrated to reduce hydroperoxide toxicity in neurons. In a head to head trial of the abilities of various antioxidants to prevent glutamate toxicity, cannabidiol was superior to both a‐tocopherol and ascorbate in protective capacity. Recent preliminary studies in a rat model of focal cerebral ischemia suggest that cannabidiol may be at least as effective in vivo as seen in these in vitro studies…” 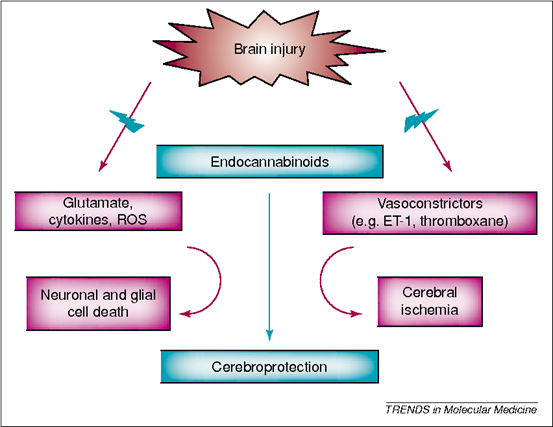 THC has sometimes been associated with the triggering of cerebrovascular accident. Apparently, THC triggers the reversible cerebral vasoconstriction syndrome (RCVS) and also contributes to atherosclerosis, the accumulation of lipids on the walls of blood vessels. There is a particular study which concludes that cannabis use could be a major cause of cerebrovascular accident in young cannabis users.

Nevertheless, those studies that analyze the relationship between cannabis and cerebrovascular accident conclude that they are indeed related to some extent, but also that there are additional factors at play which are not usually considered by most studies, such as the way of life, genetic factors, consumption of alcohol, etc. More studies are needed in order to confirm whether the use of cannabis is associated with stroke.

Smoking increases the risk of suffering a cerebrovascular accident

Cannabis and Ictus are well linked. The endocannabinoid system is related with the cardiovascular system, hence, it is highly likely that our endocannabinoids, as well as the THC and CBD phytocannabinoids, among others, play a fundamental role in the regulation and the functioning of the cardiovascular system. There is evidence that supports an association between the use of cannabis and stroke, although the exact relationship in not known yet.

The use of medicinal cannabis in different diseases is currently under deep research and it has been shown that, in this particular disease, more studies are need in order to confirm whether therapeutic cannabis has beneficial effects.