Cannabis and Cancer pain relief and other benefits.

How can cannabis contribute to the treatment of cancer?

Current therapies against cancer are focused on 4 approaches. Surgery (removal of the tumor), chemotherapy, radiotherapy and biological therapies.

Perhaps, in the case of cancer, it is where medicinal cannabis has been used the most, as an aid and to support treatment. Therefore, many cancer patients choose to help tackling their disease by consuming the raw dried plant (smoked, vaporized…), in the form of oils or other formats and even as a drug, such as Dronabinol or Nabilone, that are used to treat nausea and vomiting caused by chemotherapy. They are often used if other medications to treat nausea have not been effective.

In addition, as one of the main side effects of chemotherapy are nausea and vomiting, it is very difficult to eat during treatment and the lack of essential nutrients worsens the health condition of the patient. It is known that CBD whets the appetite and it is effective against pain and beneficial to anxiety and sleep control, on top of having antitumor properties.

It has been shown that some cannabinoids are able to block the proliferation (uncontrolled division of cells) of tumor cells and neoplasias (abnormal formation or growth of tissues) but are also able to act on the immune system.

It has been shown that CBD blocks a protein from the G protein family, known as GPR12, involved in cell proliferation and survival. Therefore, CBD may block metastasis. Metastasis is a phenomenon by which one or several tumor cells are able to migrate to another area of the body, disguised in the bloodstream, and to multiply in a new location, causing a new tumor.

In order to grow and proliferate, a tumor needs to form blood vessels to gather all necessary nutrients. This process is called angiogenesis (angio, from the greek “vessel, conduit” and genesis, from the greek “creation”). There are several studies showing that cannabinoids are able to block angiogenesis, thus preventing tumor proliferation and survival in a new location. Since nutrients and oxygen are no longer provided, the process of metastasis fails and tumor cells eventually die.

It has also been shown that cannabinoids may also induce the apoptosis (programmed cell death) only of cells containing errors, which is common among tumor cells. 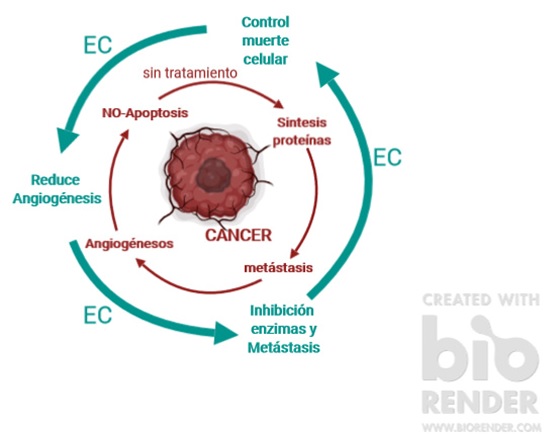 The image shows a summary of the 3 main functions of endocannabinoids associated with cancer:

The efficacy of cannabinoids as antitumor compounds has been recognized in patients with a tumor type that affects the glia (brain cells), that is, advanced glioblastoma (8 out of 9 patients showed a positive response).

There are also studies that show the effectiveness of CBD and THC in breast cancer, several types of leukemia, hepatic adenoma and hepatic carcinoma, lung adenocarcinoma, prostate cancer, etc.

The mechanism of action of CBD is still under study, but it is known to inhibit cell proliferation by mainly acting on CB1 receptors. Furthermore, it prevents oxidative stress (toxic to cells) and increases endocannabinoid levels. It is also known that CBD is able to increase the protein levels of a cell membrane protein (it is an adhesion molecule) known as ICAM-1. It has been show that increased ICAM-1 levels decrease metastasis.

In addition, CBD increases the cellular uptake of cytotoxic drugs (toxic to cells) through a receptor called TRPV2, which inhibits cell proliferation and results in the death of the tumor.

What exactly is cancer?

Cancer is a multifactorial disease. The cells of our body have a control system that prevents them from dividing indefinitely and specializing or differentiating into a particular cell type, such as a skin, bone, organ or tissue cells, for instance. These checkpoints that regulate their division and proliferation can be evaded under certain circumstances, but we also have a system to eliminate these cells that is known as apoptosis or programmed cell death.

Cancer appears when, due to a carcinogenic agent (a substance or factor that induces errors in our genetic material, or DNA, see figure 1) cells evade the checkpoints. DNA errors may happen due to UV radiation or the chemical agents present in the smoke of tobacco, for instance, and the accumulation of many errors modify the checkpoint regulatory pathways transforming normal cells into aberrant cells that replicate and do not die, therefore forming a tumor.

Given the different types of tumors, the less aberrant and differentiated the cells are, the better the prognosis. 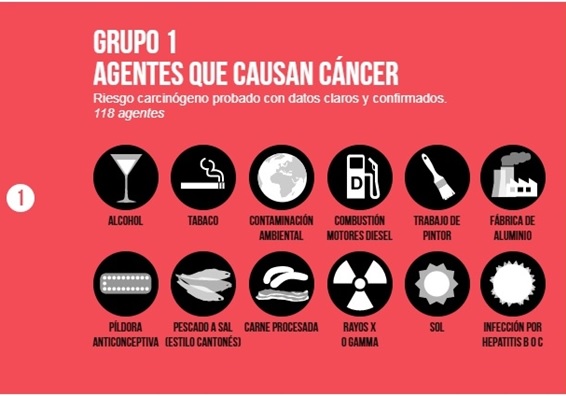 Figure 1: Example of the WHO list of carcinogenic substances. Carcinogens cause metabolic or chemical alterations that mutate DNA, which lead to cancer. Source: https://www.elmundo.es/grafico/salud/2015/10/30/5633c8cb22601da2218b458d.html
https://www.elmundo.es/elmundosalud/documentos/2015/10/iarc/iarcB.html

Cancer is the leading cause of death in developed countries, but it is also in these countries where technologies are mostly improved to allow its rapid detection and cure.

Nevertheless, treatments for cancer are very toxic and aggressive to humans and the side effects of these medications include nausea, hair loss, dizziness, weakness, pain, etc. This is due to radiotherapy and chemotherapy not being specific enough to destroy only cancer cells as they also affect healthy cells that are still dividing.